Chad: Institute calls on AU to be Proactive on issues of Peace, Security

The Nkafu Policy Institute, Yaoundé, has called on African Union’s Peace and Security Council’s to be more proactive on issues aimed at guaranteeing peace and security in Africa.

Mr. Francis Tazoacha, Director, Peace and Security Division, Nkafu Policy Institute made this call in a communique issued after a webinar on Public Policy Dialogue on return of democratic rule in Chad.

The communique was made available to the News Agency of Nigeria (NAN) in Lagos.

The theme for the Public Policy Dialogue was; ”A Return to Constitutional Order and Democratic Governance in Chad: Is the African Union Not Crawling?”

The event was organized by the Peace and Security Division of the Nkafu Policy Institute, a think-tank of Denis and Lenora Foretia Foundation.

”It brings together about 68 participants, to provide a platform for knowledge sharing and dialogue on the lackluster attitude of the African Union (AU), the Regional Economic Community that Chad belongs to and Chad’s neighbours towards the return to constitutional order and democratic governance in Chad.

” Public Policy Dialogue is one of a series of events organized by the Peace and Security Divisions of the Nkafu Policy Institute to harness its own contribution in the African Union’s agenda 2063.

”And the Goal 16 of United Nation’s Sustainable Development Goal (UNSDG) Agenda 2030 which spells out that we cannot hope for sustainable development without peace, stability, human rights and effective governance, based on the rule of law,” he said. According to Tazoacha, the African Union should sanction the military junta in Chad for violating the constitution as spelt in African Union’s Peace and Security Council.

He said that the constitution spelt out that whenever there was an unconstitutional change of government, sanctions should be meted on the perpetrators so as to set a precedence.

Tazoacha cautioned France not to meddle in the African internal affairs especially in her former colonies. 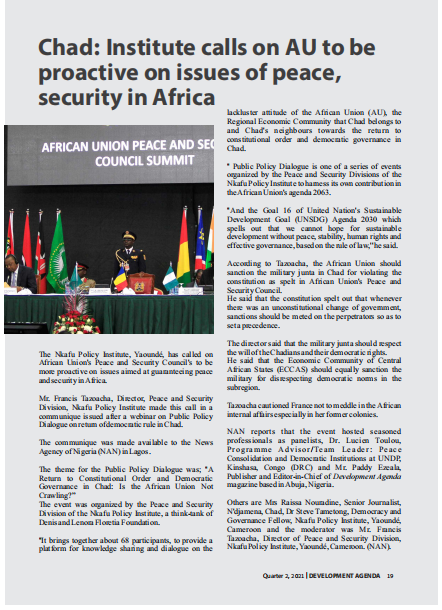