Low Covid-19 Cases In Africa. What Explains This?

Since the first case of COVID 19 was made known worldwide in December 2019, the world as of November 10, 2020 had recorded over 51 million cases and over 1.2 million deaths [1]. The African continent as of the same date had recorded the lowest number of cases when compared the other continents of the world, with close to 2 million cases and over 45 thousand deaths [1]. Africa is therefore seen to contribute to about 3.7% of the global caseload and to about 3.6% of the global death roll [1,2,3]. Although some few countries in Africa such as South Africa, Morocco and Egypt are witnessing a surge in the number of COVID-19 cases, a drastic decline in the number of cases was observed in the months of July, August and September 2020 [4,5]. According to preliminary analysis by the African branch of the World Health Organization, Africans may be twice as likely to experience COVID-19 without any illness, compared with people in the rest of the world [6].

The trend of COVID 19 cases observed in Africa contrasts with several other parts of the world. Just the Unites States of America alone (as of November 10, 2020) had close the 6 times the number of cases and deaths recorded in the entire African continent [1]. This bulletin therefore seeks to explore possible reasons for the low number of COVID 19 cases and deaths observed in Africa when compared to other continents of the world.

REASONS FOR THE LOW NUMBER OF CASES IN AFRICA

As shown in Figure 1, the testing level in Africa is still very low compared to other continents of the world [7,8]. Elsewhere, the testing strategy adopted by most African countries do not favour the identification of all cases. According to WHO Regional Director for Africa, Dr. Matshidiso Moeti, most African countries have focused on testing travellers, patients or contacts, and it is thus estimate that a significant number of cases are still missed [7].

Besides the low testing rates in Africa, there are wide variations in the COVID-19 testing rates across Africa the different African countries. According to data obtained from, “Our World in Data”, a UK-based project which collates COVID 19 information, only 16 African countries had data on testing for COVID 19 as of November 2, 2020 (meanwhile the first COVID 19 case in Africa was reported on February 14,, 2020) [8] Figure 2. While Luxembourg had a testing rate of 1752 tests per thousand (as of November 2, 2020), Morocco which had the highest testing rate in Africa as of the said date had a testing rate of 91 tests per thousand.

About half the countries on the African continent have a ratio lower than the threshold of doing at least 10 tests for every positive case recommended by the Africa CDC [7]. Even worse, in most countries, there’s insufficient data available on testing to know how much is being done [7,8]. 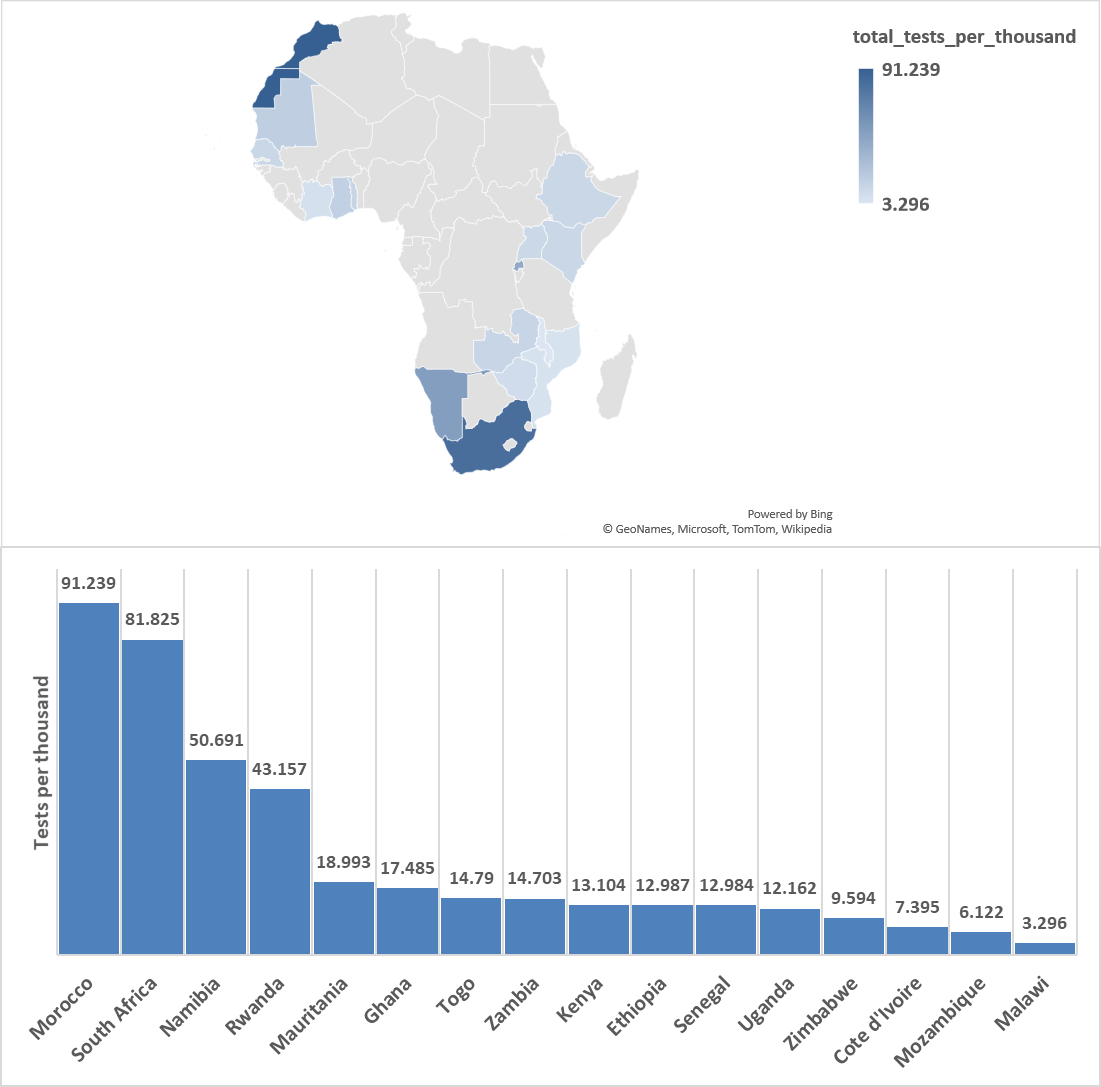 2. The Youthful Nature of Africa’s population

One of the most widely accepted reason accounting for the low number of COVID 19 cases observed in the African continent is the youthful nature of the population inhabiting the continent. As shown in Figure 3, the population pyramid for Africa suggests that only about 3.5% of Africans (compared to 19.1% Europeans) are over the age of 65 years which is the most affected age group in terms of illness and death from COVID 19 [9, 10].

Figure 3: Comparison of the Population pyramids for Africa and Europe

The African culture has been found to be more inclusive of older persons. Older persons in Africa are commonly seen to live with their families instead of multi-residence housing facilities intended. Such facilities have proven to be extremely high-risk environments for transmission of COVID 19 [11]. The New York times at one point reported that, one third of all deaths came from nursing home residents and their workers [11].

4. The imposition of early strict lockdowns in many African countries

Most African countries instituted lockdown early when case numbers were still relatively small [13]. This postponed the worst of the pandemic, allowing hospitals and health workers to better organize a repost. A study by South Africa’s biggest medical insurance company, “Discovery Health”, concluded that the lockdown in South Africa would have averted 16,000 deaths by the end of the year [13]. Governments took early, quite drastic action through the lockdowns, at great cost to their economies and this has significantly yielded fruit in terms of curbing the spread of the disease.

5. Reduced Mobility due to poor road networks and innovation

Travel restriction are thought to have helped limit the spread of the virus. Travel within the African continent can be more challenging than in other areas around the world due to the lower development of continent’s road network. Additionally, the high cost of inter-continental flights has made air travel less attractive [11].

According to a recent article published on the WHO African Regional Office website on September 24th, 2020, the low population density in Africa was listed as one of the contributing factors to the low number of cases observed in Africa [14]. A correlation analysis between population density [15] and number of COVID-19 cases reported as of November 10, 2020 [1], contrast this claim (Figure 4), as the correlation was found to be very weak (correlation coefficient =0.48). Other analyses point to the fact that when compared to other continents, Africa has the second highest population density (44.25 people/km2) (Figure 4).

Figure 4: Correlation between population density and number of COVID-19 cases across continents

SARS-CoV-2 does not affect Africans

Rumours have been circulating across the continent SARS-CoV-2 (virus responsible for causing COVID 19) does not affect black people. This rumour fueled partly by the fact that a Cameroonian student in China, who was among the first people to contract the disease, responded well to treatment [17]. There is however no scientific evidence or explanation to suggest that melanin protects black people from the coronavirus or that African blood composition prevents Africans from contracting the coronavirus [17].

Other myths that lack scientific evidence.

Lisa Claire du Toit, and Neelaveni Padayachee in a recent article debunked a couple of myths circulating around Africa that lack scientific evidence [17]. These myths amongst many other include:

The African continent was initially projected to record catastrophic outcomes due to COVID 19. However, the number of cases recorded so far have shown that Africa is one of the least hit continents. Several factors, inherent to the African continent seem to be working together to explain this disparity. These factors range from low testing rates, the nature of the population, road infrastructure, Africa’s experience in handling epidemics and other unexplained phenomena. Several myths are circulating in Africa on COVID 19 which if not properly handled could fuel the propagation of COVID 19 as people might be tempted to believe that they cannot be affected by the virus Continuous sensitization through the appropriate channels using well adapted messages is therefore a key thing to consider.

The low number of cases observed in Africa is however no reason for the continent to relax its efforts in curbing the spread of the disease. Health workers in many African countries have raised concerns about the unavailability of Personnel Protective Equipment, low motivation packages, little or no refresher trainings, just to name a few. The low COVID 19 cases in Africa should be taken as an opportunity to rapidly transform Africa’s health system and the time for that is now.