An Analysis of the Effects of Oil Price Fluctuations on the Conduct of Monetary Policy in the Economic and Monetary Community of Central Africa. 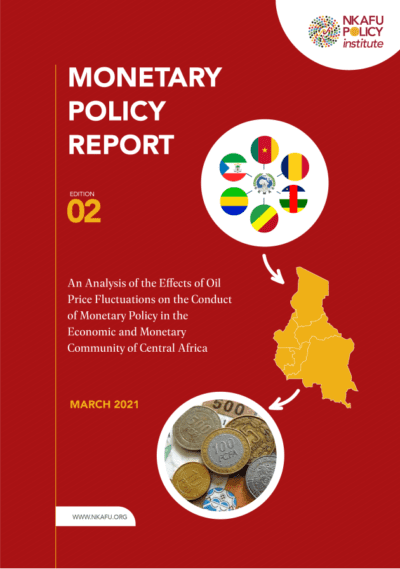 For many years, the economies of the Economic and Monetary Community of Central Africa, like most of the world’s economies, have been confronted with numerous fluctuations in the price of raw materials on international markets. For these predominantly extroverted economies, that is, those dependent on export earnings, these price variations have consequences for their macroeconomic performance and the conduct of economic policy. Like most economic crises in the world in the past, the pandemic caused by the new Coronavirus that has been raging since 2020 has also brought with it many changes. Between the confinement measures taken by public authorities to curb the spread of the virus and the resulting slowdown in global economic activity, there has been an inevitable significant drop in global oil demand. The direct consequence of such a scenario is the fall in oil prices on world markets, which is very bad news for the public finances of oil-exporting countries.

Using data from the Bank of Central African States – for the tender interest rate and the money supply – the World Bank – for inflation, GDP growth rate, and the basic budget balance – and the National Institute for Statistics and Economic Studies in France – for the oil price – over  the period 2001 to 2020, we show that oil price variations influence the dynamics of monetary variables in the CEMAC as well as the stance of monetary policy decisions. In this sense, we note a non-linearity between monetary policy and economic growth in the CEMAC, for a price level of 48.82 dollars. Thus, below 48.82 dollars, monetary policy can be accommodating or expansionary but rather restrictive when prices are above this threshold.

While it is clear that the BEAC’s monetary policy has a decisive role to play in absorbing the effects of oil shocks in the CEMAC, it should be pointed out that its effectiveness should be reinforced by structural policies implemented by the various states.

To this end, we recommend that the various governments:

Founded in 2012, the Nkafu Policy Institute is a non-partisan Think Tank at the Denis & Lenora Foretia Foundation that works to catalyze the transformation of African countries by focusing on social entrepreneurship, science, technology, health, and the implementation of development policies that create economic opportunities for all. The Nkafu Policy Institute is a leading African research center with a mission to independently provide in-depth and insightful policy recommendations that will enable all Africans to prosper in free, fair, democratic, and sustainable economies.