Examining Business Creation In Cameroon From The Perspective Of Women

Women have a reasonably huge potential of workforce in Cameroon, with more than 50.5% of the population [1]. They contribute enormously in virtually all food products intended to nourish many people in urban areas. In effect, the creation and expansion of business is an effective way of being autonomous for women working in the formal and informal sectors. Women are involved in so many income generating activities and various projects that helps to increase the
country’s national wealth while creating jobs that enhances the advancement of women and the family (Nkafu DBI report, 2020). A 2009 report of the African Development Bank (AfDB) and the International Labour Organization (ILO) on Cameroon, illustrate the percentage of female-headed households at the urban (22.4%) and rural (14.5%) levels. Moreover, their support to family life is significant since about 73.55% of them (from 15 to 49 years old) cover at least one family expenditure, compared to 61.84% of men even though the sources of revenue remain the preserve of men [2]. Despite this recognized potential, the economic condition of women is still in jeopardy. Why? We will focus on the steps taken by the Government of Cameroon (GOC) regarding the status of women and look at the persistence of bottlenecks that hampers female entrepreneurship. Finally, we will propose tangible recommendations on the steps to be taken by the GOC to ameliorate the conditions of women in business.

To ensure that female entrepreneurs have the same opportunities to succeed in business as men, the GOC has decided to take an action based on three dimensions: [3] This include the definition of an institutional framework for the promotion of female entrepreneurship, the promotion of education and vocational training for women, and the multifaceted support for women entrepreneurs.
With regards to the definition of an institutional framework to encourage women entrepreneurship, the GOC created the Ministry in charge of Women Empowerment and the Family in 2004. One of its core assignments was to guarantee an increase in the level of parity of women’s participation in the socio-cultural, economic and political activities of the country. In this regard, the government has already carried out the following actions:

The country Program for Decent Work (PPTD) to promote decent work for all was signed by the GOC in October 2014. This program for decent work is at the level of Priority 1: «Increasing opportunities for decent jobs and promotion of Income Generating Activities (IGA) especially for women, young people and vulnerable groups» that the implementation of the National Action Plan for the Development of Female Entrepreneurship (PANDEF) developed by the ILO and included in the PPTD has been planned. This is about «Promoting a new generation of more dynamic and more female entrepreneurs capable of running sustainable businesses for decent jobs that are conducive to growth, to get out of poverty». The GOC  has also embarked on the development of the support program for the promotion of female entrepreneurship (PAPEF). The Ministry of Finance in partnership with all stakeholders in the sector, has set up a National Strategy Document for inclusive finance adopted in 2013. The aim is to alleviate poverty sustainably by providing essential financial and banking services at
low cost for consumers in difficulty and those excluded from conventional financial services such as women and youths. The implementation of the gender and women’s economic empowerment project (PGAEF) in the Transport Sector is another project of inclusive growth that aims to give opportunities to women and young people. The connection of women and family centers to the internet was set up as a partnership deal between MINPOSTEL and MINPROFF1 on July 31 2015 to connect the various Centers for the promotion of women and the family (CPFF) in Cameroon. It aims to facilitate access to information on economic opportunities available throughout the Cameroon’s territory [4].

1 MINPOSTEL stands for the Ministry of Post and Telecommunication while MINPROFF stands for Ministry for the Promotion of Women and the Family
Concerning the promotion of education and vocational training for women, the GOC has undertaken some reasonable actions. One of them is by resolving gender disparities in education and training. To this end, some positive yet partial measures have been taken such as the provision of scholarship and inducements to promote girls in scientific and technical domains. The awarding of prizes to the best female learners for the continuation of their studies; informing communities on non-discrimination in the education of young girls; the increase of technical and vocational education schools; the creation of Appropriate Technology Centers (CTA); and the creation of Women’s Promotion Centers, 94 of which are currently operational. All these moves have been taken to empower women for sustainable development. However, these moves are limited by the persistence of administrative bottlenecks.

The promotion of female entrepreneurship in Cameroon has been greatly hampered by administrative bottlenecks. Besides, the lack of the operationalization of the existing institutional framework has been identified as the first administrative obstacle. The text has made provisions for many things, but little is achieved. There exist a gap between what is planned and what is effectively realized on the ground. For example, the 5 by 20 project launched in 2017 in Cameroon to support more than 100 women entrepreneurs is not operational. Another obstacle to women’s entrepreneurship is the lack of financial, economic, material and intellectual resources. Women are often confronted with a lack of financial, economic and material resources necessary to carry out income generating activities that can help empower them. In Cameroon, only 9% of women had access to loans according to the data of both AFDB, MINPROFF and ILO. 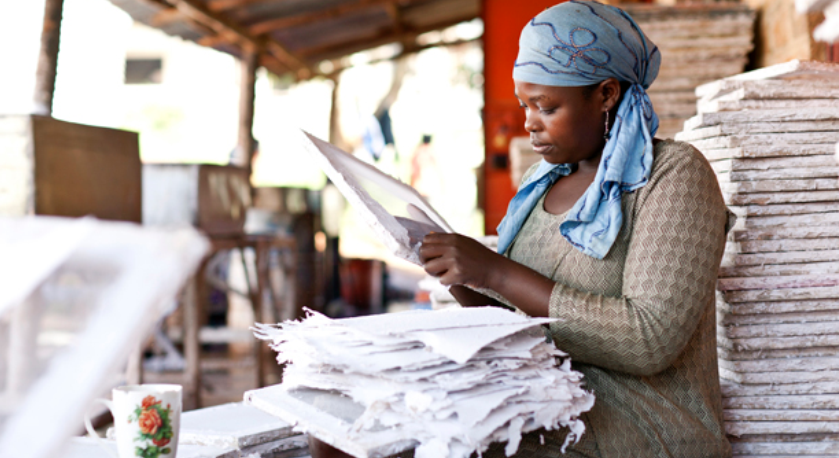 Also, 89.5% of female businesses were unable to access credit at the market rate [5]. The lack of psychological and cultural support is another obstacle to women’s entrepreneurship potential. Psychologically, it is believed that the feeling of female marginalization leads to stress thus impacting on their personality, and affecting the mental health of children (Choudhry et al, 2016). There is also the lack of legal support which is evidenced in the legal imbalance between men and women in terms of land acquisition. It has been observed that women are almost absent in the land registers. Although Ordinance 74-1 of 6 July 1974 guarantees without discrimination, to any natural or legal person having landed property the right to freely enjoy and dispose of it, in practice, the situation does seem to hardly favor women.

What should be done to remedy the conditions of women?