Oil prices bearing the brunt of the Corona virus

The implications of the Corona virus (COVID-19) will be heterogeneous, but oil prices will likely be lower in the medium-term

Oil prices have plummeted as the Coronavirus has intensified across much of Europe and North America. The Energy Information Agency (EIA) has revised down its global oil demand forecast, which suggests that major importers such as China as well as European countries will reduce demand for oil. The latter has followed the trend of industrial production, which has slowed as manufacturing of waxes, perfumes, dyes, shaving creams, shampoos and conditioners that rely on refined oil have been disrupted by the virus. As such, Brent and West Texas Intermediate both fell by 24.59% and 30% to $31.13 and $30 per barrel respectively on Monday, March 9th (see daily price).  Not only has the virus halted manufacturing supply chains in China, it has exacerbated the global cyclical slowdown, with both Euro Area and German industrial production plummeting in recent months (See figure 1) 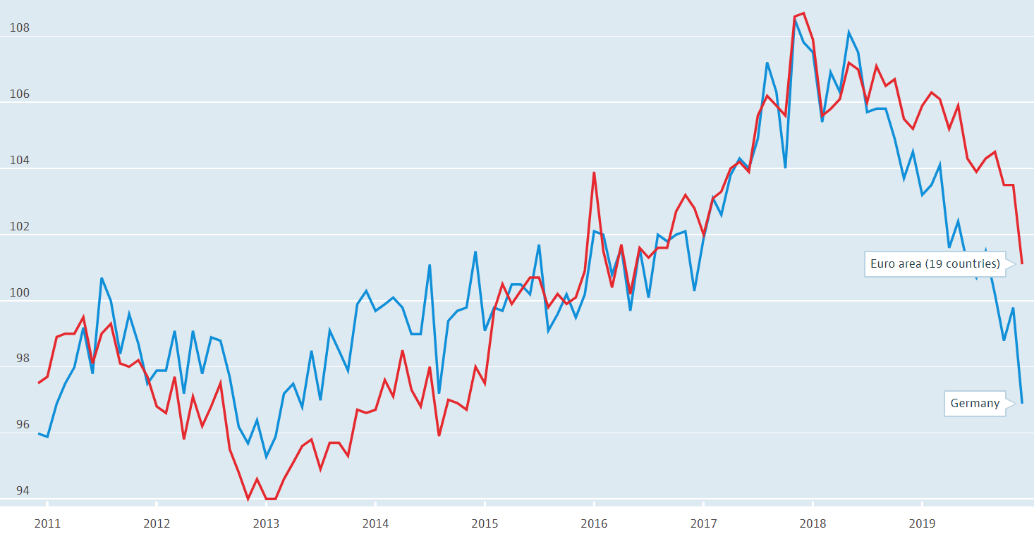 The trend of falling industrial production is even more noticeable across all grades of fuel spanning gasoline to diesel, which also fell by 2.9% and 3.8% respectively (Fig 2).  As such, the implications for developing economies will be much more pronounced in the near term, as a weaker currency and higher interest payments will compound budget constraints. As the virus has spread across continents, oil prices will likely remain under pressure as OPEC and Russia are locked in a price war. This will cause prices to rise at a more gradual pace in the future, and lower oil demand and staling investment will have more lasting economic consequences for commodity exporters. Crude oil imports have fallen by 13.4% (Fig 2), which will cause the economy to grow at a slower pace. Furthermore, inflation will rise in developing and emerging economies as their currencies depreciate due to falling oil prices, while higher fiscal and current account deficits will lessen the impact of economic reforms agreed in the current extended credit facility agreed with the IMF. Cameroon’s three-year arrangement was approved on June 26, 2017, for Special Drawing Rights (SDR) 483 million,, with $76 million disbursement contingent on continued implementation of agreed reforms. Furthermore, the economic impact of COVID-19 will be determined on the extent to which domestic economic activity is interrupted by a lockdown as the service sector contributes 56.8% of GDP (Index mundi, 2017).

Figure 2: downturn in oil prices are broad-based and visible across categories

Even as global oil prices have fallen to historic lows, the economic impact of COVID-19 will be more heterogeneous as a pharmaceutical company in Japan is currently producing vaccines from antibodies; an approach first used in China (Herper and Feuerstein, 2020). As such, deferred spending in China could reduce the adverse impacts of the virus, while a recovery in manufacturing activity will increase demand for oil over the medium term. I modelled the impact of falling oil demand, increased supply from OPEC and Russia as well as a severe and more benign outcome from the Corona Virus. In the event where viral infections increased across Africa, North America and Europe, lower consumer demand, a faltering service sector and the absence of an OPEC + Russia agreement on output restrictions, o will see oil prices trade lower for much of Q2, before ending 2020 at $56/bl.

Another scenario could see oil prices reciver slightly, with negative spillovers lessened by demand-switching to China

In another scenario, the Chinese get COVID-19 under control using via transfusions of blood products while Takeda, a Japanese pharmaceutical company produces and markets a global anti-virus. This will accelerate the recovery in Chinese manufacturing and industrial sector, while the service sector will benefit from deferred spending. As such, the fall in oil imports in Europe will be assuaged by Chinese demand, which will import oil to support a tepid recovery in industrial activity. Under such a scenario, oil prices will recover to $67/bl as monetary and fiscal measures boost the economies affected by the virus. My model also adjusts for additional demand and stimulus measures undertaken by governments across the world. (See table 1). Meanwhile, the impact of the Coronavirus will be heterogeneous as 70% of the cases have been treated in China according to the World Health Organization. As such, the recovery in domestic demand and manufacturing activity will become evident in the upcoming Purchasing Managers’ index (PMI) (a measure of global manufacturing activity), while commodity exporters will likely see a marginal, albeit belated, recovery in oil prices. However, the price war occasioned by the lack of an agreement between Saudi Arabia and Russia could place further downward pressure on oil prices.

Meanwhile, Gasoline and Automotive diesel comprise the majority of crude oil consumption in the U.S.A, while domestic heating oil and industrial activity comprise 37% and 31% of crude consumption in Europe. As such, the interlinkages between European supply chains and developing economies will determine the extent of the negative impact of the virus. Additionally, a majority of developing economies are increasingly linked to Chinese industrial activity, while Europe is dependent on Chinese and global external demand; As such the impact of the virus will be equally damaging and perhaps recessionary in the absence of a targeted fiscal response as seen in most advanced economies. This is the case as slower industrial activity ultimately mean lower oil prices.

The COVID-19 ultimately means lower manufacturing and less travel, which explains low oil prices (figure 4). This is further explained by the absence of an agreement between Saudi Arabia and Russia, who have different budget needs, fiscal deficits and market outlooks. Whilst Saudi Arabia hopes to keep oil prices high, Russia is seeking a greater share of global oil markets, hence the price war. Consequently, controls for changing domestic and industrial demand outcomes in Europe and China, as well as a gradual recovery in manufacturing output. 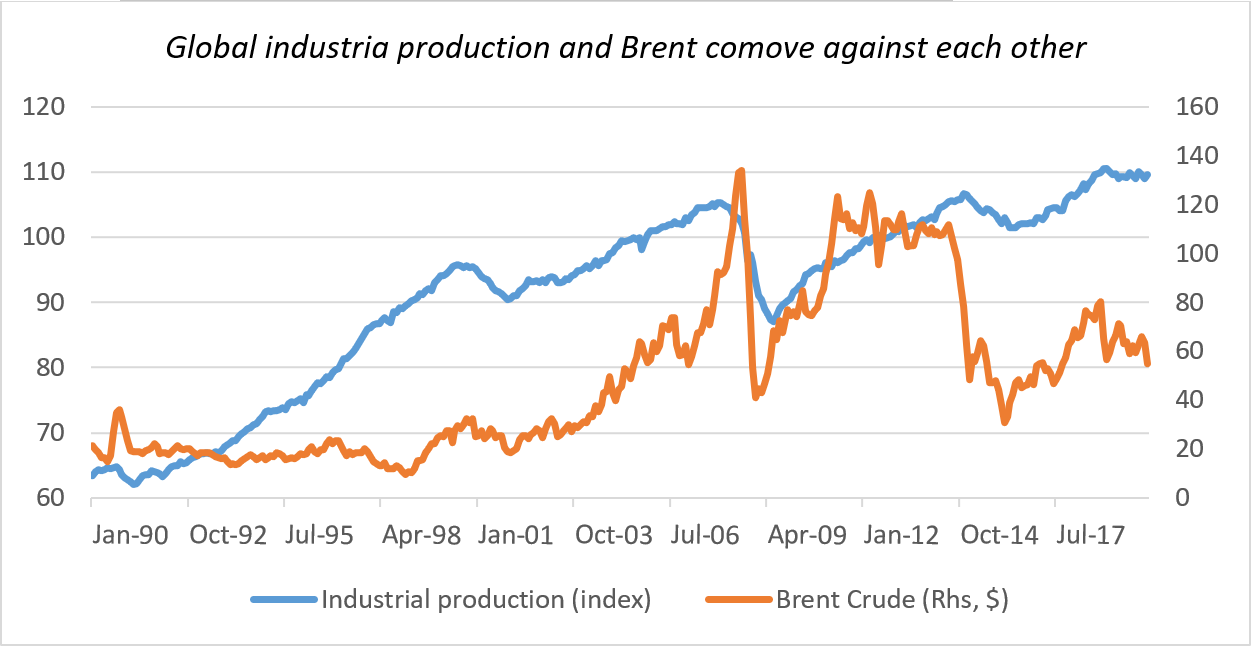 This is contingent on the number of treated cases in China increased from 70% to 85% and sufficient information sharing with the most affected European countries. Furthermore, deferred spending in China and Europe will eventually support an economic recovery as the impact of more accommodative monetary policy and targeted fiscal responses from governments engineer a recovery (Table 1). As such, oil prices will likely hit new lows, but a recovery is in sight in the near-to-middle term. Furthermore, it is important to note that unemployment insurance in China and frozen tax payments in some advanced economies to support businesses will likely boost business and consumer sentiment and prevent a pronounced economic slowdown or falling demand due to a loss of consumer income.

Monetary accommodation will reduce funding constraints in financial markets and support equity valuations, but the positive spill overs are unlikely to affect the real economy, which is susceptible to changes in fiscal policy that can have a more direct impact on household’s incomes. As such, monetary accommodation will only serve to extend the financial cycle and reduce the risk of a financial crisis rather than support consumer incomes and domestic demand on a sustained basis. 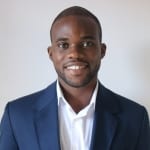