Can the Anglophone Crisis in Cameroon be solved through a State-Centric Approach? 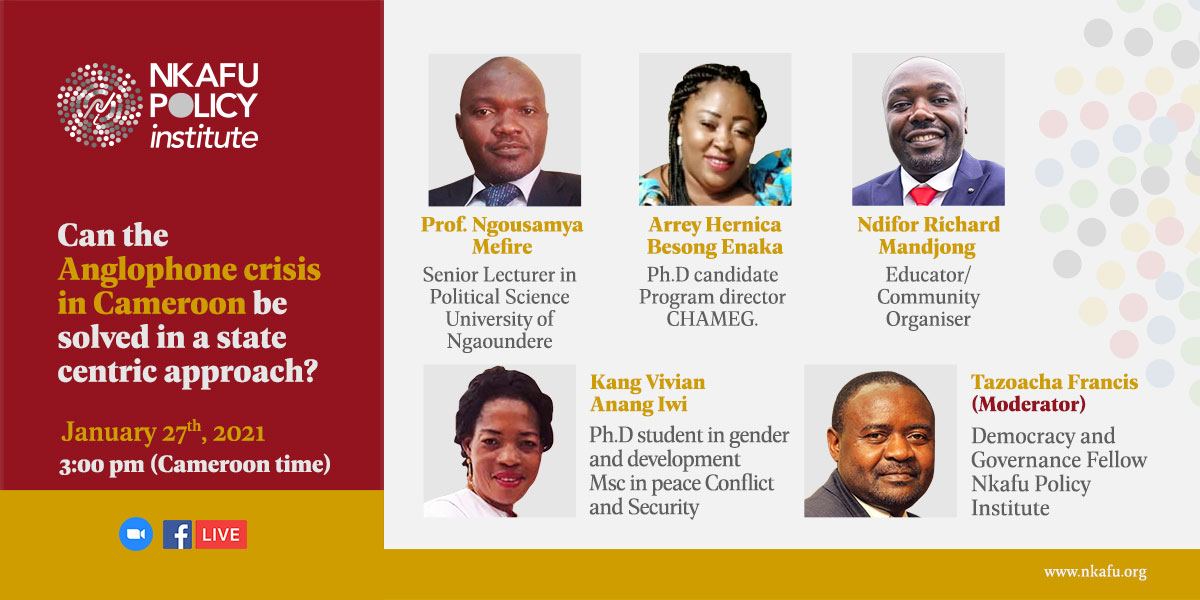 Can the Anglophone Crisis in Cameroon be solved through a State-Centric Approach?

Webinar: Can the Anglophone Crisis in Cameroon be solved through a State-Centric Approach?

Conflicts are unavoidable in human life and existence and are indispensable part of life. Conflicts are essential for change in human society since they help to build relationships in groups, establish a group’s identity, build internal solidity in groups and can lead to balance of power in society as well as create new rules and laws (Coser, 1956). Nevertheless, when conflicts are violent, and depending on the nature and type of intervention schemes used, they remain unresolved and can become prolonged disturbing policy-making and sustainable development since attention is side-tracked from issues that will then improve the lives of people to the conflict. Therefore, it is important to resolve violent conflicts to prevent them from diverting attention from issues of sustainable development.

For the past four years, the socio-political climate in and about the Anglophone regions of Cameroon has been a matter of contention. The long standing grievances among the Anglophones population in the Southwest and Northwest regions of Cameroon concerning marginalisation particularly in the educational and legal systems by the Francophone-dominated government led to widespread protests in October 2016. The conflict escalated from a peaceful demonstration that was met with a heavy crackdown from the government security forces in 2017. As a result, the situation transformed into an armed conflict with increasing support by the population in the Anglophone regions to seek independence from Cameroun (French Cameroon) as an independent Federal Republic of Ambazonia. Since 2017, the conflict has continued unabated without any party seeming to surrender and thus end the war. Despite attempts from national and the international communities to intervene and resolve this destructive conflict, it has nevertheless, resulted in an impasse. The government of Cameroon opted for a military strategy from the very beginning of the peaceful protest that quickly metamorphosed into an armed conflict. With the deepening of the crisis, the government has also made several peaceful concessions and top-down institutional responses, including the Major National Dialogue conveyed by the President of the Republic and chaired by the Prime Minister Chief Dr. Dion Ngute, from September 30 to October 4, 2019.  Other institutional measures include among others, the following:

Despite these attempts made by the government to resolve the on-going armed conflict, the guns have still not been silenced.  The situation has even taken a critical twist with the mass killings of separatists by the Cameroonian military and counter killings with unarmed civilians, particularly women and children bearing the brunt of the price. Separatists’ leaders and fighters even appear to be more radicalised and galvanised with the increasing militarisation of cities by government security forces.

The fundamental question there is why is the crisis so difficult to be resolved despite all governmental and international initiatives? There are many discerning voices from many stakeholders in the conflict both from national and international communities who believed that if the government had not adopted a state centric approach in resolving the crisis, the conflict should have long been sustainably resolved.

It is from this perspective that the Nkafu Policy Institute of the Denis and Lenora Foretia Foundation has come up with this opportunity to engage all conflict stakeholders and the general public to participate in the public dialogue on whether the current state-centric approach can resolve the Anglophone conflict and bring about the most cherished peace and sustainable development in the affected regions in particular and Cameroon in general, while at the same time looking for other possible peaceful pathways to resolving the conflict sustainably.

Objectives of the event

The Objective of the 90 minutes event is to an opportunity to stakeholders in the conflict and the general public to engage on a debate on to the extent to which the state centric approach been effective in resolving the crisis in the North West and South West regions of Cameroon.

From this perspective and in accordance with the mission of the NKAFU Policy Institute – a Think Tank (research institute) of the Denis and Lenora FORETIA Foundation – is centered around carrying out an independent research to provide comprehensive and incisive evidenced-based policy recommendations that will precipitate a succinct pathway in resolving the crisis in the North West and South West regions in particular and Cameroon in general.

This event is opened to the general public both within and out of Cameroon and will bring together participants from the public, private, academia and civil society sectors, including youth leaders, journalists, researchers, traditional authorities, religious leaders as well as human rights activists and other stakeholders interested in searching for an alternative and a peaceful solution to the Anglophone crisis.

No participation fee is required. Nevertheless, all participants are required to register online free of charge on our website by clicking the registration button below.

The discussions will be organised around the following key thematic concerns: