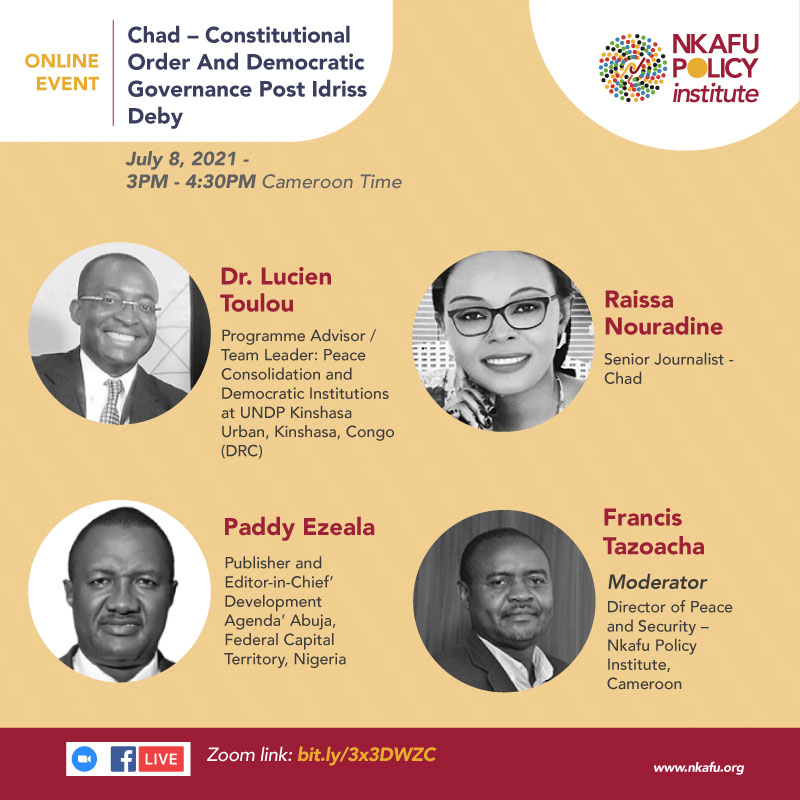 Venue: The event will be held on ZOOM and streamed live on Facebook  (Register Here)

Chad is a desert nation named after lake Chad and surrounded by many countries facing severe security problems, like Libya to the north, Sudan to the east, the Central African Republic to the south, Cameroon and Nigeria to the southwest (at Lake Chad), and Niger to the west. Idriss Déby Itno took over power from President Hissène Habré in December 1990 by leading a rebellion against the latter’s government. Déby survived numerous coups attempts and rebellions against his rule before winning elections in 1996 and 2001. He revised the constitution, and after eliminating term limits, he won elections in 2006, 2011, 2016, and 2021 before meeting his untimely death on the frontline when battling against rebels in 2021. For Déby’s 30 years in power, Chad has played the role of a military fulcrum in the escalating fight against armed groups in the Sahel and Central and West Africa. Déby’s military forces have been vital in the Sahel crisis, the fight against Boko Haram and its splinter groups in the Lake Chad region and beyond. Déby has intervened- from Darfur to Libya, Mali, Nigeria, Niger, Cameroon and the Central African Republic. In fact, Chad’s military champions the G5 Sahel alliance (comprising of Burkina Faso, Mali, Mauritania and Niger) that was created to combat armed militias operating in the region. The death of Idriss Déby and the naming of his son – Mahamat Idriss Déby as interim president is a move that has been applauded by many and heavily criticized by others as they describe this as an unconstitutional change of government.

It is with respect to this backdrop that the Peace and Security Division of the Nkafu Policy Institute seeks to better understand the modalities or measures that the AU can take to ensure a return to Constitutional Order in Chad while concurrently preserving the State’s security and territorial integrity.

The event’s objective is to engage conflict and security experts, stakeholders and the general public in a discussion relating to the possible consequences that may arise following President Idriss Déby’s death. Also, this event is aimed at harnessing the possible ideas that the AU, other regional bodies and neighbouring States can implore to ensure a return to constitutional order in Chad.

This event is open to conflict and security experts, stakeholders and the general public both within and without Cameroon. It will bring together individuals from the public and private sectors, academia, civil society organizations, youth leaders, journalists, researchers, traditional authorities, religious leaders and human rights activists.

Venue: The event will be held on ZOOM and streamed live on Facebook