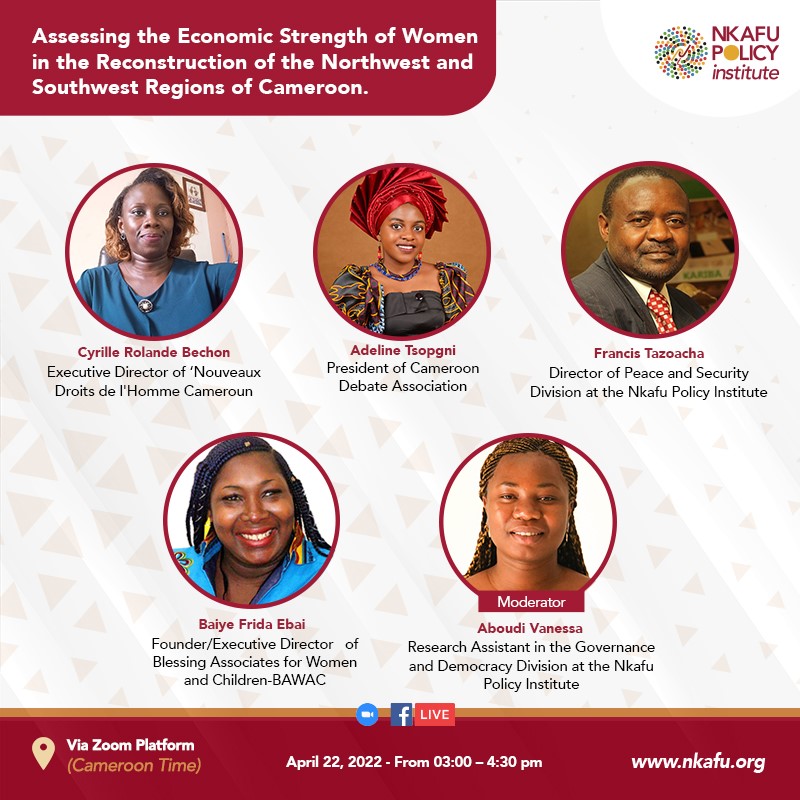 Theme: “Assessing the Economic Strength of Women in the Reconstruction of the Northwest and Southwest Regions of Cameroon.”

Since October 2016, Cameroon has been facing a large-scale socio-political crisis in its North West (NW) and South West (SW) regions. Caused by identity claims, this crisis has gradually drifted into an armed conflict with particularly disastrous socio-economic consequences. Agriculture, which represents an important part of the economic activity of the two regions, is particularly affected. This crisis has indeed weakened important sectors such as tea, oil palm, cocoa and coffee and has led to the demise of agro-industrial behemoths that used to structure entire sectors of the national economy. According to GICAM (2018), as a result of vandalism and other acts, many businesses have reduced their commercial presences to its simplest form. The loss of earnings in terms of numbers is significant and is added to the damage already suffered as a result of asset destruction. Moreover, GICAM (2018) estimates that this crisis has already cost 2,153,192,651 CFAF of destruction of real estate, rolling stock and furniture and the loss of earnings in terms of turnover is estimated at 269 056 139 065 CFAF in the sectors investigated (agri-food, agro-industry, agricultural services, distribution, etc.). As a result, the country’s overall business climate has been affected by the crisis, which has had a negative impact on the country’s attractiveness to foreign investors. Given that in Cameroon women represent 71.6% of workers in the informal agricultural sector, they have a major role in reconstructing these two regions in crisis.

The objective of this event is to analyze and evaluate the economic role of women in the reconstruction of the NW and SW regions of Cameroon. More specifically, it aims to: