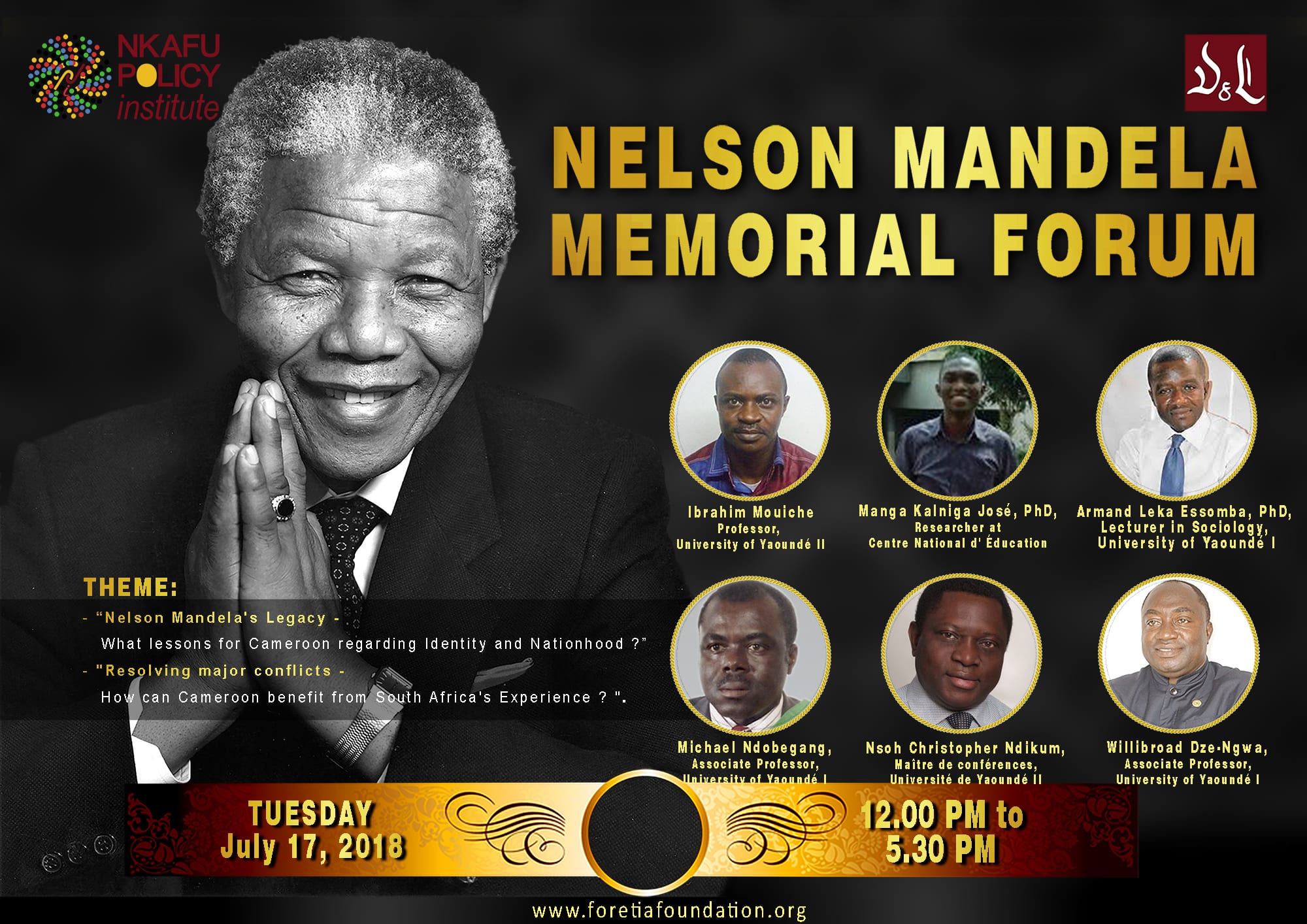 Organized by the Nkafu Policy Institute, a think tank at the

The conference will take place on Tuesday 17 July 2018 from 12.00 AM to 5.30 PM at the Denis & Lenora Foretia Foundation’s headquarters in Yaoundé, located in Simbock, about 30 meters on the untarred street opposite Collège Jésus-Marie.

In 2009, the UN General Assembly declared the 18 July as “Nelson Mandela International Day” in honor of Nelson Mandela’s contribution to peace and human rights. Following that declaration, the UN joins the Nelson Mandela Foundation’s call for people worldwide to spend 67 minutes every  July 18 to acknowledge and celebrate Mandela’s contribution and dedication to peace and human rights. Given this and within the context of Cameroon, the Nkafu Policy Institute, think tank at the Denis & Lenora Foretia Foundation is organizing an event to commemorate the Nelson Mandela International Day in Cameroon.

This year’s conference comes in a rather critical context of insecurity, informed by the Anglophone crisis and the rise of secessionist ideology and separatist violence, as well as a debate on what ‘living together” entails, given the resurgence of ethno-identity speeches and tribalism. The conference this year also has an unusual point which is the institutionalization of the Nelson Mandela Memorial Awardto recognize an individual whom by virtue of his/her actions exemplifies the character and commitment to human rights as espoused and practiced by Mandela. The day will be characterized by two themes.

On the one hand “Nelson Mandela’s Legacy – What lessons for Cameroon regarding Identity and Nationhood ?” and, on the other hand, “Resolving major conflicts – How can Cameroon benefit from South Africa’s Experience ?”.

Topics and perspectives of the conference

First Panel:“Nelson Mandela’s Legacy – What lessons for Cameroon regarding

– What explains the rise of ethnic and tribal discourse in Cameroon?

– What are the dangers of the tribal and ethnic discourses in Cameroon and how do these relate to the policy of apartheid?

–  How do we prevent ethno-centric and tribal discourse ?

– What can the commission for bilingualism and multiculturalism do ?

– Which institutions are adequate for a better way out of the crisis?

– What crisis exit mechanisms to adopt?

– How do we bring about reconciliation and restore confidence in the system?

– What do we mean by dialogue?

The debates will be synthesized and published respectively through an electronic medium (a video-film) and a document that could take the form of a White Paper entitled “Settling the identity crisis in Cameroon”, written by the Nkafu policy Institute. A final declaration will also be delivered at the end of the conference by the recipient of the Nelson Mandela Award, who will suggest as a moral authority his or her vision and the way out of the crisis. The conference will be an opportunity to find why some government reforms are not always successful in the two North West and South West regions and try a solution to address the issues.

Requirement of attendance: Free to invite participants who have confirmed their participation.

The Foundation will offer light refreshment at the end of the discussion.

Thanks for your continued support