Searching for a Negotiated Settlement to the Anglophone crisis in Cameroon: Possibilities and Potential

Home/Event, webinar/Searching for a Negotiated Settlement to the Anglophone crisis in Cameroon: Possibilities and Potential
TALLA Belder Carynthon
Share this: 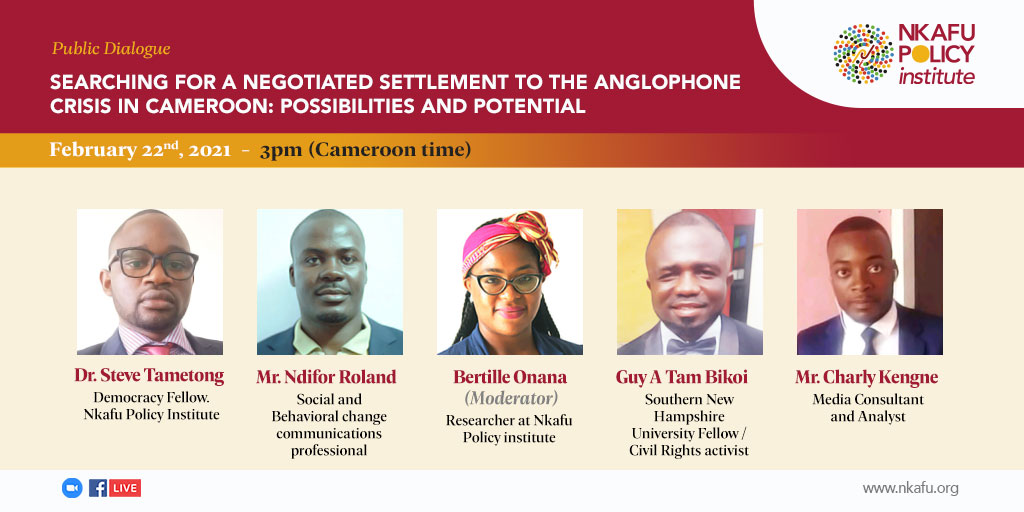 Searching for a Negotiated Settlement to the Anglophone crisis in Cameroon: Possibilities and Potential

“Searching for a Negotiated Settlement to the Anglophone crisis in Cameroon: Possibilities and Potential”

Unlike many African countries, Cameroon enjoyed relative peace and stability since achieving independence and reunification in 1960 and 1961 from French and British colonial rules respectively. While the drivers of this peace and stability are subject to political debates, the last couple of years has seen the country plunged into political chaos characterized by growing instability and insecurity. Most often, the Anglophone crisis that is raging in the Northwest and South West Regions, the Boko Haram insurgency in the Far North Region and the conflict in the neighbouring Central African Republic with a shared border with Cameroon’s East Region are quickly cited as the causes of instability in Cameroon. Despite the efforts made by the Cameroon government and multilateral engagements involving foreign powers and international organisations, the insecurity seems to be intensifying, thus compromising already achieved development gains and blurring the growth and emergence of the country by the 2035 agenda

Of critical concern among instability drivers in Cameroon is the Anglophone crisis which began as peaceful protests against longstanding Anglophone marginalisation (real or perceived) led by Common Law layers and teachers of the English sub-system of education (with the Common Law and the Anglo-Saxon system of education representing the core colonial inheritances of the then British Southern Cameroons). Since the insurrection, various attempts by the government of Cameroon, have proven largely inadequate, resolving the crisis sustainably. The government of Cameroon opted for a military strategy from the very beginning of the peaceful protest that quickly metamorphosed into an armed conflict. With the deepening of the crisis, the government has also made several peaceful concessions and top-down institutional responses, including the Major National Dialogue conveyed by the President of the Republic and Chaired by the Prime Minister Chief Dr. Dion Ngute, from September 30 to October 4, 2019.

Unfortunately, the crisis has continued unabated, gradually transforming itself into a civil war between government forces and the Anglophone separatist who are clamouring for the independence of a supposed state they call Ambozania. This has continued to usher in grave security and human rights consequences. The International Crisis Group (ICG) in a statement on 26 September 2019 notes that the “violence has claimed around 3,000 lives, displaced half a million people within Cameroon, compelled another 40,000 to flee to Nigeria, deprived 700,000 children of schooling in their home areas and left one in three people in the Anglophone regions in need of humanitarian aid.

In the face of this political and security stalemate, some countries (including the US and Switzerland) as well as conflict resolution experts and institutions/organisations have continued to advise the government of Cameroon on the need for an inclusive dialogue mediated by an internal or external mediator in order to seek for a negotiated settlement of the Anglophone conflict. Even though there are no signs of progress in this regard, it is necessary to engage in a public discourse on how a negotiated settlement of the crisis could be approached. In this connection, the Nkafu Policy Institute is organizing a public dialogue event to stimulate discussions and debates on the potentials of arriving at a negotiated settlement of the Anglophone Crisis in a bit to bring about durable peace and security in The two conflict affected regions.

Objective of the event

The objective of this event is to engage the Cameroonian public in a frank dialogue on the possibilities and challenges of getting to a negotiated settlement between the main conflict parties.  What are the opportunities, possibilities and potential challenges?

This is in line with the mission of the NKAFU Policy Institute, a think tank of the Denis and Lenora FORETIA Foundation, which pivots around carrying out independent research in order to provide in-depth and insightful evidence-based recommendations that advance the development of Cameroon and other Sub-Saharan African countries.

This event aims to bring together participants from the public, private and civil society sectors, including youth leaders, journalists, researchers, traditional authorities, religious leaders and scholars to engage in discussions on strategies that can restore peace in Cameroon.

No participation fee is required. However, all participants are required to register online free of charge on our website by clicking the registration button below.

The public dialogue event will focus on presentations on how to arrive at a negotiated settlement of the Anglophone crisis. This, it is hoped, is critical in bringing back peace and security which are essential for sustainable development in Cameroon. The thematic areas of this public discourse are centred but not exclusive to the following:

The event will consist of a 90 minutes’ open discussion on the proposed themes.